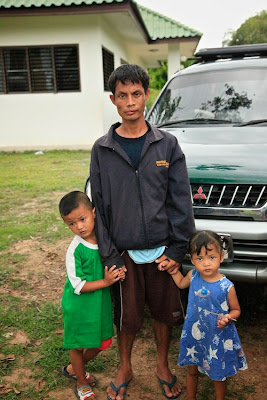 This story is a stark reminder of the desperate condition of some in our world. As some of you know, Grace Community has 2 orphan homes in Asia. One in Thailand and Cambodia. In fact, in less than 4 weeks I will return there to love on our kids.
So while we can really feel good about rescuing our 40 kids my heart breaks for this father and kids above...
Read the story below from the Director of Asia's Hope concerning this family above!

Watching the kids from Asia's Hope -- especially the older ones who have been in our care for a few years -- you wouldn't know that these kids were once orphans, that they've suffered immeasurably from the loss of their parents. They're silly, they're studious, they're satisfied, they're sulky. They have hope for the future, but at any given time, they're preoccupied with their regular, mundane things like music, sports and homework. In short, they're like adolescent boys anywhere.

You know, I define "hope" as "the promise of transformation." Asia's Hope works hard to make and then deliver on that promise to kids whose options have run out, kids who, without our intervention, will live a life of despair. Unless someone steps in to change things, these kids will live out a predictable, yet devastating script. No education. No medical care. Insufficient food. A lifetime of grinding poverty and a high likelihood of prostitution, drug abuse, disease and even slavery.

After church on Sunday, we saw one such example of despair. We met a Sgaw Karen man and his two children, age 3 and 5. The man had been in a motorcycle accident that left him with severe internal injuries, as evidenced by the huge scar on his abdomen, head injuries and facial paralysis. An orphan himself, this man had always lived on the brink of poverty.

His accident left him unable to work, so his wife left him for another man, moved far away and abandoned their children. He has no property, no home and no way to feed his children. He came to Asia's Hope to see if we would take his children and give them a chance to survive. He will probably have to beg for a living, and is likely to die an early death.

Today, those kids stand on the brink of hope and despair. If we are able to find a place and enough money to support these kids, they will survive, and will have a bright future -- an education, a loving and secure home, and access to every advantage God's people can provide them. If not, they face almost certain disaster.
It almost sounds like melodrama or overstatement. But it's not. It's simply way things are for so many people in this world. No future. No transformation. No hope.
And it's not okay.

And at this point in the blog post, I'm not sure what else to say. It's just not okay.
I'm so thankful that we get to be a part of providing hope for so many kids. But every time I start feeling content with what we've accomplished at Asia's Hope, I'm reminded of how much work there is left to do.

As the song says, "Little ones to him belong. We are weak, but he is strong." May God prove his strength in the lives of these children and the untold thousands just like them.